Josef Čapek was as a painter inspired by the Cubism period, which he recast in a distinctive way in his artwork. Even his specific handwriting is included on numerous illustrations, book covers and scenic designs. He virtuously narrated the story about a dog and a cat to children. The breadth of his engagement was remarkable. At the beginning, he created part of his literary artwork together with his brother Karel. Josef was an introvert, at the time of his masterwork focused on the depth of the human core. His poems from a concentration camp, the last part of his work, was fortunately preserved thanks to a few fellow cellmates. Josef’s tragic destiny is far beyond comprehension. (Aleš Fetters) 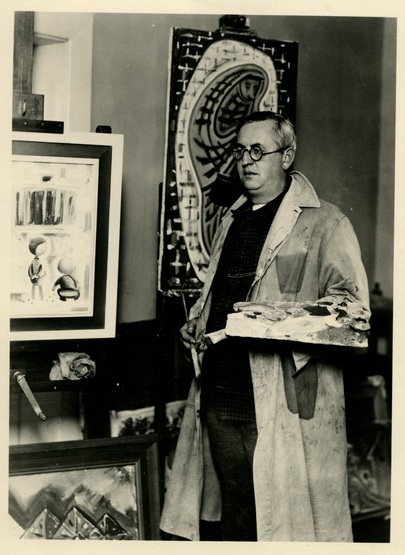 It is a wonderful region, that region of Svatoňovice, Odolov, Markoušovice and everything else that is around the Hawk Mountains (Jestřebí hory) and Žaltman, and those fossils, the petrified leftovers of ancient nature, are offering even more curiosity to it … If we say ”ours“ and ”at our place,“ it means that it is different and that elsewhere isn’t quite like it, and that something essential is missing in it. It is native, something that we obviously, and based on very powerful inner reasoning, sometimes like to hold on to. (Josef Čapek

From his literary work, we firstly have to mention the one that is surely the most popular – ”Tales about A Dog and A Cat.“ Generations of children have seen this series as their bedtime fairytale. The bedtime fairytale series from 1950 had six episodes and was directed by Eduard Hofman.

Tales about A Dog and A Cat:https://www.csfd.cz/film/177376-povidani-o-pejskovi-a-kocicce/komentare/

The director Jan Matějovský undertook a television adaptation of the play ”From the Life of Insects“ (Ze života hmyzu) in 1973. Even names like Viktor Preiss, Ilja Prachař or Petr Čepek can be found in the casting.

A television film adaptation from the short story ”The Shadow of the Fern“ (Stín kapradiny) was shot in 1984. The director Karel Vláčil took charge of the film and with the assistance of Vladimír Kröner, they wrote the script. The music was composed by Jiří F. Svoboda.

The Shadow of the Fern:https://www.csfd.cz/film/9352-stin-kapradiny/prehled/

During the same year, Věra Jordánová directed the fairytale A Fat Grandpa. Even the Lotrando robber character, also known from the fairytales of Josef’s brother Karel, appears in the fairytale.

Other parts of Josef’s artwork were book illustrations, scenography, theatrical plays, reflections, essays and a number of poems. Similar to his brother Karel, Josef was also recognized as a columnist and a journalist.